I had a blast meeting my third graders and beginning our SUPER year together.  We started the day analyzing a scene from Disney's Incredibles asking ourselves, "What is the job of a hero?".
We put the qualities on a chart and they became our reference point for the month. I am constantly reminded my kids that I will need them to "be a hero", while pointing to the anchor chart.
After that we read "The Astonishing Secret of Awesome Man", made our own Superheroes, and wrote about how we could be third grade heroes this year. 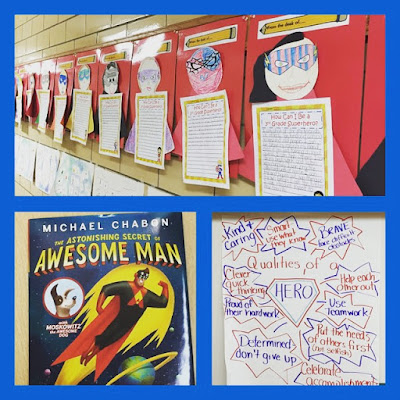 After a few other first day, "getting to know you" activities we started our first Read Aloud of the year. I was super excited to find this series of books when they were recommended by my friends at Barnes and Nobles when I was searching for a Superhero themed book for third grade.

Captain Awesome is a very funny book about a boy who loves Superheroes, particularly a comic book here called Super Dude, and creates his own hero identity called (you guessed it) Captain Awesome.  We will probably finish the book this upcoming week and the kids are loving it, particularly the way Captain Awesome sees everything around him like a superhero.  His arch enemy is his baby sister called Queen Stinkypants and he has visions that his new teacher is working for super villains determined to torture him Geography lessons.
It has been a SUPER start of the year- the pun never gets old.
Have a SUPER day!
-Damien
Posted by The Reading Buddies at 1:02 PM