Earth Day with the Lorax

This year, Kelly and I had to celebrate Earth Day a little bit early due to a poorly timed PD workshop for me.

Our inspiration for this year's festivities came from two locations
1. What we did last year
2. The fact that we had a scheduled early dismissal day

That meant scaling down a little bit, which is something that we don't do well.  Take a look at what we did last year here Earth Day-Last Year.

We started with a digital reading of The Lorax found on YouTube.com


After that we had our students work with their buddies to discuss what they thought happened after the little boy was given the final truffula seed.  After some pair and share time they shared their predictions with the whole group.  We then discussed that Universal Studios created a movie version of The Lorax and they had to ask themselves the same question.  We then watched the ending song of The Lorax the movie "Let it Grow" and talked about whether we agreed with the studio execs or not.  This video was also found on YouTube.com- You can find it here Let it Grow-The Lorax the Movie.  It's really cute and very catchy! (read-it's still stuck in my head). 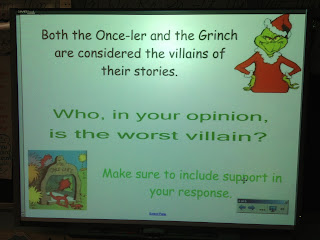 This is a picture of the SMART Board file we used for our next activity.  We had previously gotten together for Grinch Day in December and discussed all things The Grinch. (Check out previous Grinch Day post here: Grinch Day 2012)  The kids were given a graphic organizer where they were to discuss who they thought was the worse villain and provide support.

We had some great answers such as:
-The Grinch because he did it on purpose where the Once-ler's actions were accidental.
-The Once-ler because he can't fix what he did and the Grinch did.

My personal favorite from an adorable shaggy-haired second grader:
-The Once-ler because you can live without Christmas presents but you can not live without oxygen from the trees.  (LOVE HIM!)

If you looked at last year's Earth Day post you saw the Land of the Lorax that we made.  Adorable right!  Well this year Kelly saw an idea on Pinterest about make truffula tress out of pencils and we added that this year and it made a world of a difference!  They are SOOOOO much brighter and visually appealing than the colored version we made last year. 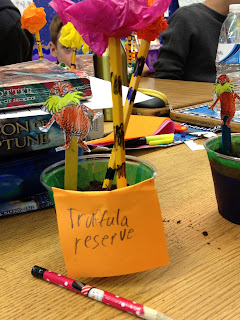 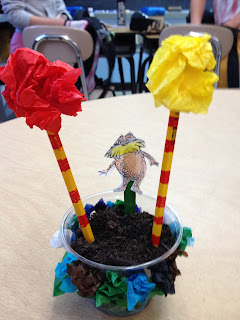 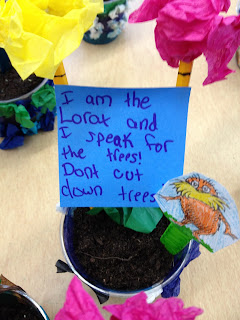 How adorable are these.  The tissue paper truffula trees are absolutely adorable and add sooo much to the project.  The kids used markers to create the zig-zags around the pencil and crumpled tissue paper to make the tufts.  The cups were decorated with tissue paper in Earth colors and glue.  We planted grass seed and they now line the windowsill in my room and look FANTASTIC!  Everyone who walks into the room is absolutely in love with them. 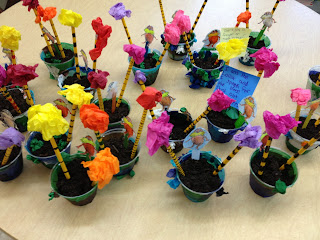 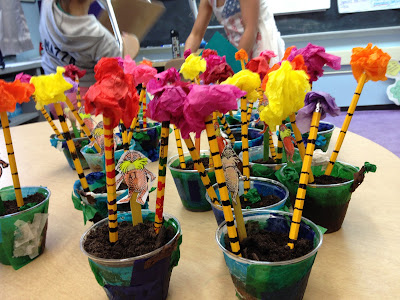 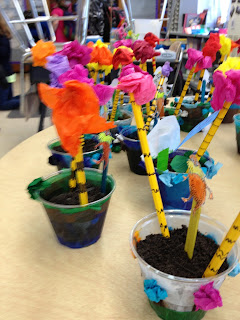 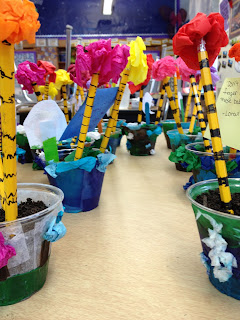 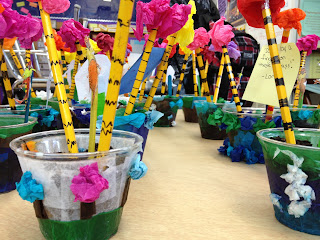 I am the Lorax, I speak for the trees!
Have a FANTASTIC Earth Day, buddies.
Damien and Kelly
Posted by The Reading Buddies at 12:35 PM